You are here: Home » Latest Posts » Healthy Foods » Refined vs. Unrefined Coconut Oil – Does It Even Matter? 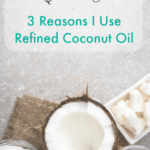 Well, not always… Let’s talk about the reasons why I use refined coconut oil (and so should you!). One of the biggest misconceptions I see in the health world is that unrefined automatically equals better.

This isn’t always the case, especially with coconut oil.

I actually choose refined coconut oil every time (this is the one I use).

Call me crazy, but I’ve weighed the pros and cons, and for me personally, refined coconut oil ends up on the shopping list.

3 Reasons I Use Refined Coconut Oil

Coconut oil’s benefits are due to one important factor: its fatty acid composition. Coconut oil contains a high concentration of medium-chain saturated fatty acids like caprylic acid and lauric acid.

These fatty acids fight inflammation caused by unstable polyunsaturated fatty acids, and are a great substitute for processed vegetable oils.

These fats are also easily digested.

And the best part? They put up one powerful fight against pathogens like bacteria, viruses and fungal infections.

Coconut meat itself contains 17 amino acids, B vitamins, potassium, iron, and fiber — but the majority of these are already filtered out during the process of making coconut oil.

Coconut oil is all about the fat, and that’s pretty much the same between refined or extra virgin coconut oil.

2. The Taste is More Practical

Don’t get me wrong: I really dig the occasional coconut macaroon or coconut cream pudding.

But I don’t want coconut flavor invading my scrambled eggs, fresh popcorn or homemade chicken broth. And neither does the rest of my family.

We tend to eat more coconut oil when it’s refined and flavorless, because it’s so much easier to blend into any kind of dish.

If you love coconut-flavored anything, then this probably isn’t a big deal. But if you’re like me, refined coconut oil simply fits into your life more seamlessly.

Frankly, we’d barely touch our coconut oil if it was the unrefined variety. So I choose refined because I know we’ll actually use it.

Digestive issues and allergies are some of the most common health problems invading our society today.

For this reason, unrefined coconut oil can be irritating to a sensitive digestive system.

The coconut solids in the oil contain a lot of potentially allergenic compounds. In refined oil, these have been completely removed, which is why it is odorless and flavorless.

Extra virgin coconut oil has a relatively low smoking point of 350 degrees F. This is pretty low as far as a cooking temperature goes.

If you’re eating your oil raw or using it mostly for baking, this is probably not an issue. But for stovetop cooking, this is generally too low of a smoking point.

So keep in mind how you’re going to be using your coconut oil when you’re deciding between refined and extra virgin.

How Refined Coconut Oil is Made

Don’t get me wrong: in the battle between refined vs. unrefined coconut oil, high-quality coconut oil is still a must.

Because there is a “right” way and a “wrong” way to refine coconut oil — the natural version and the industrialized version.

Quality sources make sure their coconut oil is clean, pure and uncontaminated.

They don’t use harsh solvents to refine their oil. They simply use an expeller press to remove coconut solids from your oil.

This is why I still don’t buy the cheapest coconut oil at the grocery store. I want to buy from a company that cares about preserving the integrity of their oil, and who used natural processes to refine it.

The answer is no. They are essentially the same. So if you’re looking for the benefits of coconut oil’s fatty acids, you’ll still find them in the refined oil.

Do you have stomach pains after eating a small amount of coconut oil?

If someone tells me they have stomach pains after eating a very small amount of coconut oil, my first question is what kind of oil are they using. Chances are, they tell me unrefined coconut oil.

Switching to a quality refined oil often eliminates this problem.

(The other possibility is that you’re just eating too much coconut oil too fast — see my advice at the end of this article for how to avoid that.)

If you are new to coconut oil, heed my advice: start with less than a teaspoon per day.

Slowly add more over a period of days (or even weeks). You can work up to 1-3 tablespoons per day (in your food, or in tea or coffee).

This can help your digestive system get used to the oil. It also prevents any possible reaction that your system might have to coconut oil’s strong antibacterial, antiviral and antifungal properties.

I know it’s easy to fall in love with coconut oil and want to use it all. the. time. But please work up slowly. You’ll thank me, for real.

More of My Posts About Coconut Oil: