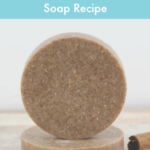 Lately, I have been enjoying this amazing homemade Oatmeal Cinnamon Soap. Did you know that cinnamon can help boost brain power and relieve stress?  Maybe that’s why I like it so much! Whatever the reason, the spicy fragrance of cinnamon makes this oatmeal soap absolute perfection. 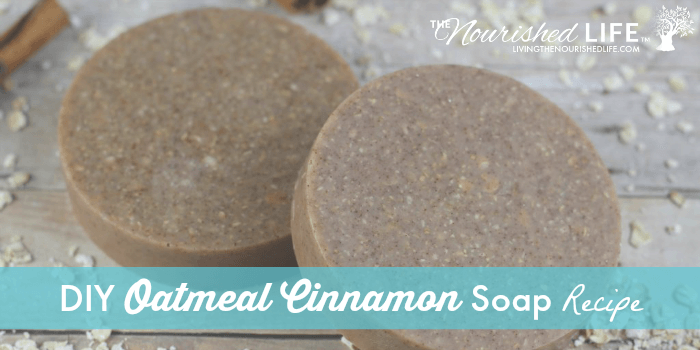 I like using oatmeal in my homemade soaps for the ways it nourishes my skin.  Since it’s fall, I decided to make a bar of oatmeal cinnamon soap.  Not only is cinnamon a great fragrance, but it also has some benefits for your skin.  It gently exfoliates to help relieve dry skin, which is definitely something that I need on my hands.  It is also naturally anti-fungal and antibacterial, making it an excellent addition to a hand soap.

I didn’t want to wait weeks for the Oatmeal Cinnamon Soap to cure, so I used melt and pour soap.  I used a shea butter base in this Oatmeal Cinnamon Soap because I like the extra moisture, but you can use any type of base.  If you have a suspension base, it would be a great one to use with the oatmeal and cinnamon.  If you don’t have a suspension base, I’ll give you some tips on how to get a good pour.

This Oatmeal Cinnamon soap takes about 10 minutes to make and pour.  This recipe will make four 4-ounce bars, but you can double it or halve it to make more bars or fewer bars, depending on your needs.

Melt the coconut oil in a small bowl.  Add the cinnamon and stir well.  Cinnamon can clump when you add it directly to the soap.  By mixing it with coconut oil first, it will incorporate into the melted soap better.

Cut the soap into ½ inch cubes.  Melt in a double boiler or in a glass bowl in the microwave.  I use 30 second intervals, stirring between each interval.

Let the soap cool completely.  It should pop out of the mold.  If it doesn’t, put it in the freezer for 10 minutes and try again.

Cari Dunn is homesteading on an 11.5 acre farm with her husband, three kids, 5 goats, and flock of chickens. She currently blogs at Everything Pretty where she features health and beauty tips along with DIY beauty recipes.