You are here: Home » Latest Posts » Metabolism » Fitbit Review: My Embarrassing Secret to How I Get 10,000 Steps a Day on my Fitbit

So a Fitbit review has been long overdue for me. The truth is, when I grabbed this little green guy in February this year, I didn’t have a lot of faith in myself to stick with it. I don’t have the best track record. So even though I wanted to write a gushing Fitbit review a few days into our little adventure,  I put it off.

Now it’s been six months and I think it’s time I spilled the beans. 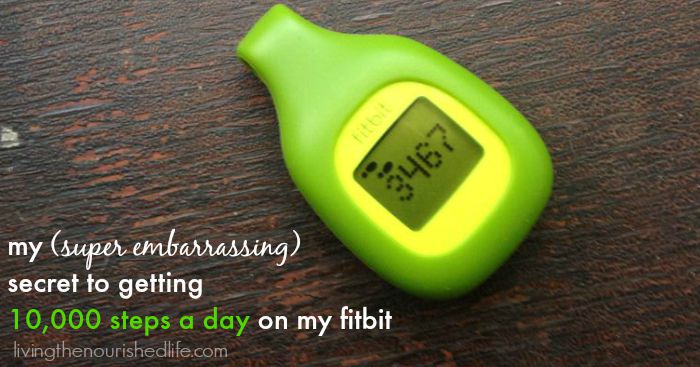 Frankly, I love it. Like seriously. Forgetting to wear my Fitbit first thing in the morning would feel like not taking a shower. Or forgetting my purse when I go out. Kinda that sinking “oh no” feeling.

I may be a little too attached. But I don’t mind. This little green reminder has made a huge impact on my life. Here’s my fitbit review, which is not only honest but maybe also a bit embarassing.

The thing about my Fitbit is that it doesn’t lie. It’s painfully honest.

I mean, I knew I wasn’t very active. Sure, I threw in a couple good strength training workouts every week, and went on the occasional walk. But truthfully between my working at a computer and homeschooling the kids, I get caught up with a lot of chair time. Moving around isn’t really “built in” to my life. It has to be purposeful.

At least, that’s what I realized once I clipped on my Fitbit.

That’s when I found out I was actually sedentary.

It was a cruel reality check.

So you know me. I don’t do the whole “guilt and shame” thing when it comes to my health. I just acknowledged reality and realized a change was in order.

I needed to get up and move.

Funny how a little green alien device clipped to your pants will make you want to take the stairs a little more often… go enjoy a sunset walk instead of just watching TV… find out with your kids how many steps it is around the little league field.

Fitbit Review Revelation #2: I was stuck in a box.

Then it dawned on me that a long time ago I put myself in a box. I told myself I wasn’t a good runner. That I didn’t like exercise. That I hated being active.

And I totally bought into it. For years and years.

So this year, I said to myself, “Why not run? I want to be able to run! Not like marathons or anything. But I want to know that I can pick up and run a mile or two without, you know, dying.”

Well, at first I couldn’t. Like not even a little. I think I got about 1/4 mile in my first run. My feet hurt. My shins hurt. My lungs hurt. Bad.

But instead of telling myself, “Whoa, you are not a runner, Elizabeth, and you never will be.”

I stopped being hard on myself and tried to just experience gratitude for whatever my body was capable of doing.

My progress was pretty darn slow. And I let it be. I had a lot going on in my life and I didn’t want running to take over. I just wanted to be consistent. I knew consistency would win the game.

So next I ran 1/2 mile for the first time in my life. Then a whole mile.

And then a few weeks ago I ran 2 miles straight for the first time. Ever.

I was so stinking proud.

The truth is, I never wanted to believe I wasn’t an active person. It made me feel bad. And tired. And kind of worthless. So I ignored the problem.

This year I got to a place in my life where I was ready for honesty. I want to be a healthy person. And being active in a balanced way is definitely part of that.

So even though my Fitbit gave me a rough reality check, it also made me aware of what needed to change. And without that awareness, change was impossible.

With awareness? Change was practically automatic.

The key was to be aware without being judgmental.  I wasn’t hard on myself. I didn’t call myself names. I didn’t berate myself or buy “motivation pants” or basically bring anything negative to the table.

From there, change was easy. It was just small adjustments and being consistent. I don’t always get 10,000 steps a day. In fact, I may have a couple weeks where I barely see above 6,000. But you know what? That’s still progress, and it makes me happy.

I almost don’t want to say this, because I don’t like to put too much focus on weight in general.

But healthy weight loss as a side effect of healthy choices? That’s cool with me. And that’s exactly what happened.

I didn’t diet this year. In fact, I haven’t dieted in almost 4 years. I’ve officially sworn off dieting, as I talked about here.

But during my Fitbit adventure, I went from 153 to 143 lbs over the course of six months. Without even trying. At all.

I keep aware of my food intake, mostly because I like to know what I’m eating and to make sure I’m getting enough protein, calories and whatnot. And it’s interesting to note that I’ve eaten about 2000-2400 calories every day since my little green dude joined my life. And I don’t exercise like crazy, I never go to the gym, and most nights I plop on the couch and enjoy me some Netflix just like everyone else.

So the 10lbs lost truly is just an unintended side effect of my little green friend. And I’ll take it.

I know you’ve been waiting to hear my embarrassing secret (plus I dish on why I chose the color green for my Fitbit…), so watch my video below to find out.

P.S. Want a Fitbit for yourself? Grab one here.

VIDEO: My Embarrassing Secret to Getting 10,000 Steps a Day

In case it’s not clear in the video: I’m jiving/dancing/walking in place while I commit said embarrassing act in order to log those steps.

So that’s my fitbit review. I hope you enjoyed it! Do you have a fitbit? If so, how has it helped you? Tell me about it in the comments below.